Employment Claims Resolution
2. More than 80% of ECT cases have been concluded as at 31 March 2018. Three out of four claims were concluded at the case management conference stage without having to go for a full hearing. The ECT also granted 732 Money Orders while other cases were either dismissed or withdrawn. The efficient resolution of cases is possible as the ECT process, which is judge-led and designed with simplified procedures, allows for a speedy low-cost avenue to settle employment disputes. The majority of statutory and contractual salary-related claims were concluded within six months from the date of filing.

3. Employees outside the scope of the Employment Act such as the Professionals, Managers and Executives (PMEs) who earn more than S$4,500 per month can turn to the ECT to file their employment dispute claims. Since the ECT was launched, PMEs make up about 25% of individuals who had filed claims. They would previously have had to pursue their claims through the civil courts, which was not always the most cost-effective option for lower value claims.

5. The ECT will continue to provide an affordable and expeditious way for employers and employees to resolve their disputes. There is an ongoing review by Ministry of Manpower (MOM) to 2 // 2 further streamline the dispute resolution process for employees and employers. Currently, statutory and contractual salary-related disputes are heard by the ECT, while wrongful dismissal claims are heard by the MOM. As dismissal-related claims are usually coupled with salary issues, the affected employee has to go to two different parties to resolve their issues. In order to provide a one-stop service for employees who have both salary-related and wrongful dismissal claims, the adjudication of wrongful dismissal claims will be transferred to the ECT in 2019.

ECT has jurisdiction to hear claims up to S$20,000 or up to S$30,000 if the dispute has undergone mediation assisted by the unions.

The ECT sees the following types of claims:
Statutory salary-related claims are those relating to employee entitlements under the Employment Act, Retirement & Re-employment Act and the Child Development Co-Savings Act. These include unpaid salary, overtime pay, salary in lieu of notice of termination, employment assistance payments, and maternity benefits.

Contractual salary-related claims from employees include, among other things, payment of allowances, bonuses, commissions, salary in lieu of notice and retrenchment benefits, provided that these are expressed in monetary terms in the contract.

To bring a claim before the ECT, parties must first register their claims at the Tripartite Alliance for Dispute Management (TADM). Mediation at TADM is compulsory. Only disputes which remain unresolved after mediation at TADM may be referred to the ECT. A claim referral certificate will be issued by TADM before you can file a claim at ECT. 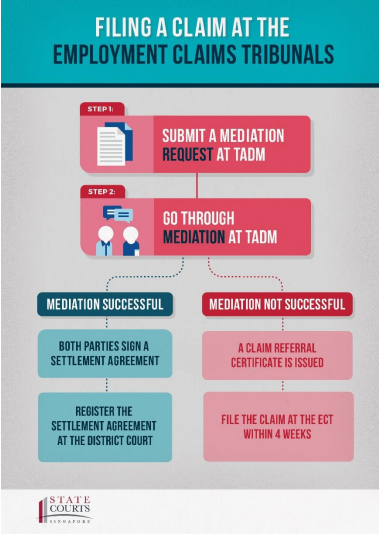 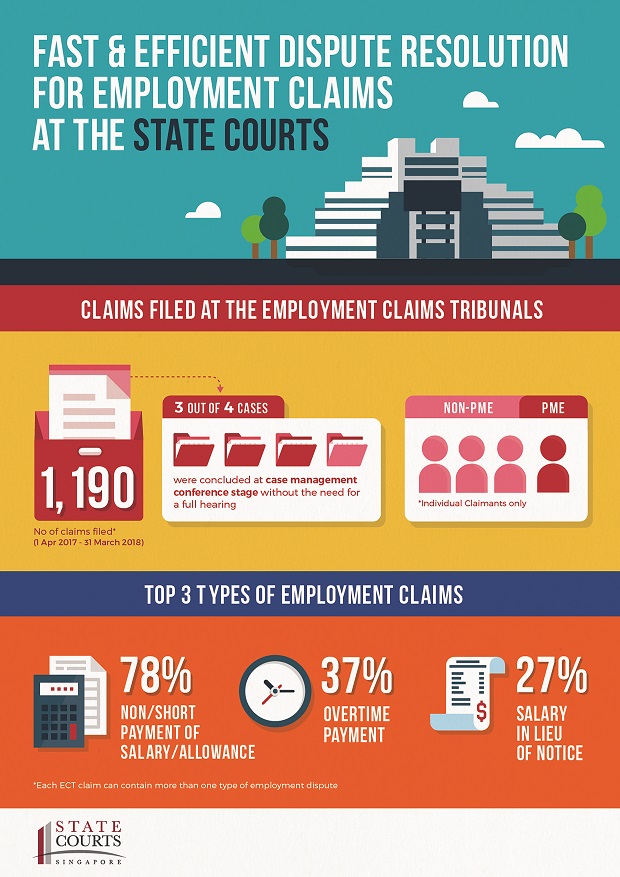 The cases from the Employment Claims Tribunals (ECT) illustrate the types of employment disputes and outcomes seen at the ECT. The cases have been generalised to ensure confidentiality of the claimants and respondents.

Case 1 - Dispute of Payment for Commission

Mr. Lee earns a basic salary of $4800. He will also be paid a commission if he hits a certain target. Based on records of his work and sales, Mr. Lee claimed that the payment of his commission was short in four months of the period in question. The company failed to pay Mr. Lee his full commission earned at his last working day.

The company claims that the employee handbook (HB) which is incorporated as part of the Terms and Conditions of the parties’ employment contract, states that “Staff needs to be in service to be eligible for allowance and/or commission payment. Therefore the commission due after the last day of the service will not be paid. In addition, any commission claim not submitted and approved prior to the notice of termination will not be paid.”

Mr. Lee also said that the company boss had also verbally told the entire sales team that amount of commission for any particular deal was going to be decided by the boss.

Mr. Lee argued that the commission owed was part of his salary and should be paid by the company.

Having heard all the evidence, the Tribunal Magistrate ruled and awarded Mr. Lee the $20,000 commission claimed by Mr. Lee. Mr. Lee has received the commission awarded to him from the company.

Madam Chan worked as a part-time sales executive in a company and was paid according to the number of hours she had worked in the month at a fixed hourly rate. However, prior to her maternity leave, the company promoted her to be the store supervisor with a monthly salary instead of an hourly rate.

Madam Chan claimed that the company should pay her salary during her maternity leave at the monthly rate which is higher than her previous hourly rate.

The company did not have any written employment contract and most of the official communications between parties occurred through a Chat group. Madam Chan said that the company removed her from the chat group while she was on maternity leave without notice, taking this as a termination of her service. She claimed that she was therefore entitled to salary in lieu of notice.

The Tribunal Magistrate considered all the documentary evidence produced and found that the company was liable for the salary of Madam Chan during her maternity leave but according to her hourly rate of pay of $9 per hour and not based on the monthly salary as claimed by the claimant. The Tribunal Magistrate also found that there was no sufficient notice period given with regards to Madam Chan’s termination. Eventually, Madam Chan was awarded a sum of about $8,700. The sum awarded was for the following:

Case 3 – Dispute of Payment for Salary and Overtime Pay

Mr. Raju is a daily rated worker. He claimed that he was paid a lower daily rate than what he expected for the InPrinciple Approval (IPA) of his salary for both his monthly salary and overtime payment.

After working for two weeks, the company found that Mr. Raju’s performance was poor and they revised his salary downwards. The company claimed that Mr. Raju’s has signed a salary voucher where he agreed to the revised salary. Mr. Raju claimed that the salary voucher was forged. The police investigated the matter and concluded that the claims of forgery were not substantiated.

Both parties were seen at the Case Management Conference (CMC) and the parties managed to reach a settlement of $5,000. 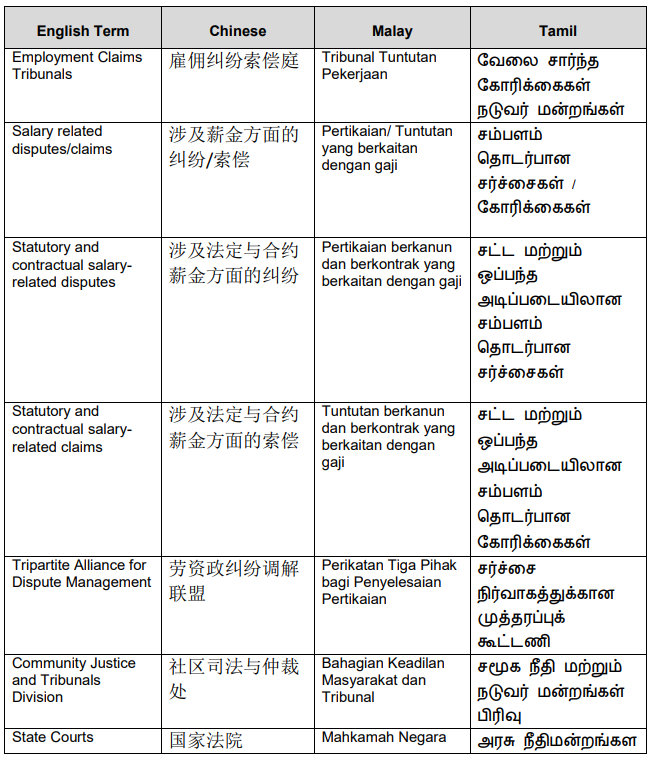